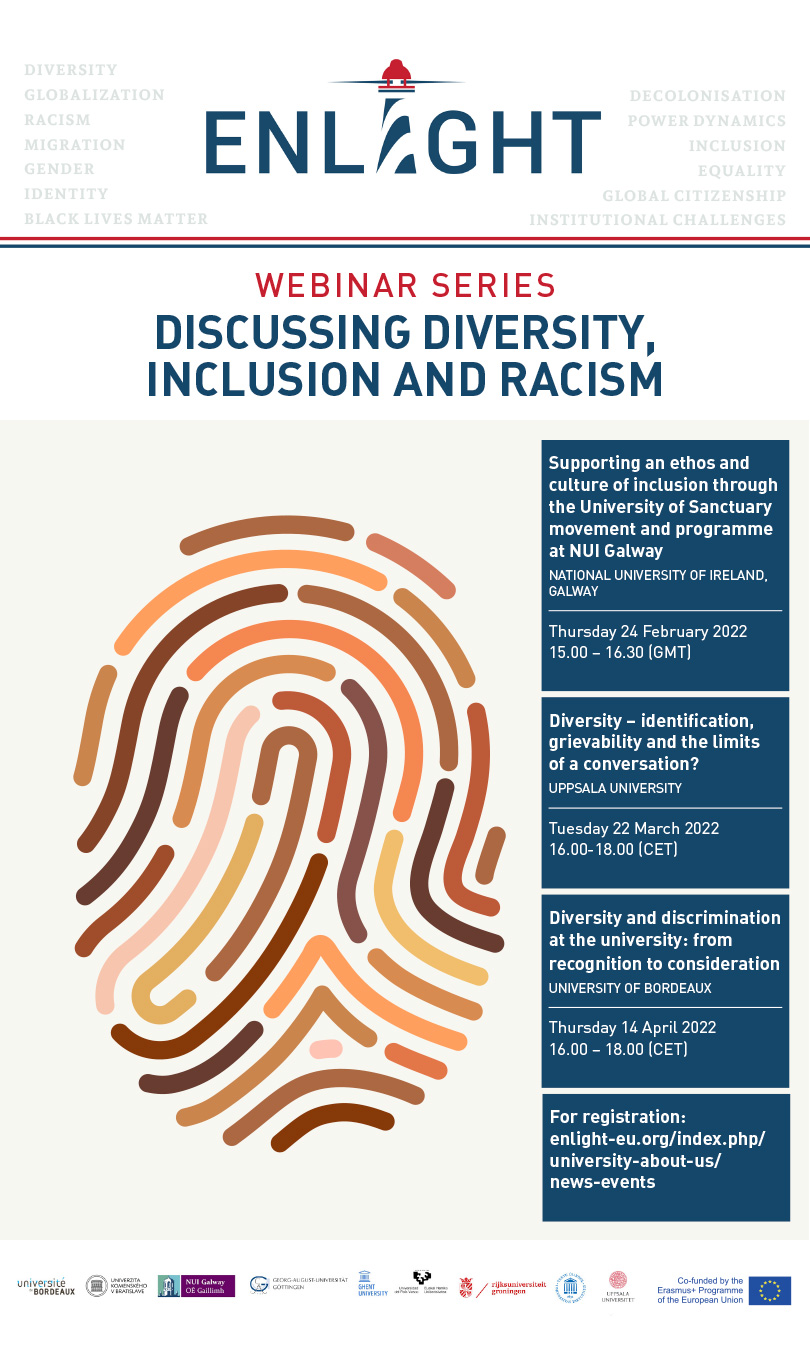 This webinar series provides an interactive platform to discuss and exchange best practices and develop initiatives that foster diversity and encourage global citizenship.The sessions are open to staff and students of all ENLIGHT partners as well as their respective local communities.

Diversity is a reality across Europe sparking debates on its meaning and its impacts on society. It is recent though, that universities have to take into account as an institution how diversity challenges our understanding of globalization, migration, gender, race and identity. Concepts and movements like decolonisation, Black Lives Matter, and systemic racism underline the inherent dynamics of power.

Universities, as institutions of knowledge committed to equality, have a leading role in empowering and supporting our staff and students to engage in critical discussions on concepts challenging the orthodoxy. Equally, Universities today embody diversity with a community of students and staff from multiple identities, histories and geographies. The challenge of how to ensure respect, inclusion and safety of all members of this diverse community is today’s urgent priority moving commitment to equality, diversity and inclusion into concrete practices.

Each monthly seminar (90 minutes) is hosted by one of the ENLIGHT partners. The schedule of webinars includes

Both at Ghent University and in the City of Ghent, initiatives have been taken to reflect on our colonial past and to develop a process of decolonising the university and the city. In this webinar, key stakeholders of these various processes will discuss the way forward and they will interactively engage in some critical introspection.

The University of Groningen (UG) will briefly go into the how and what of the UG’s Diversity and Inclusion Office (TBD), and into UG's existing policies regarding integrity, social safety, (unconscious) bias and related speech/behaviour in the workplace. All these endeavours are part of UG's path to maintain and improve a socially safe academic environment. How to navigate this with different target audiences in the community?

Two speakers will then introduce the following topics, as input for a general discussion on how to generate and implement change (how to go from policy to practice):

The registration for the Göttingen Webinar is closed

The webinar aims at a critical reflection on the imageries that we use in our work in an international context to represent people and countries of the Global South. We want to equip the participants with tools for dismantling stereotypical narratives and images and provide them with ideas of adequate representations in a post-colonial context. We therefore will look especially at racist stereotyping in images of Asia, Africa or Latin America.

Thu 24 February 2022 , 15.00 – 16.30 GMT: Supporting an ethos and culture of inclusion through the University of Sanctuary movement and programme at NUI Galway (National University of Ireland, Galway)

Thu 24 February 2022 , 15.00 – 16.30 GMT: Supporting an ethos and culture of inclusion through the University of Sanctuary movement and programme at NUI Galway (National University of Ireland, Galway)

The National University of Ireland, Galway has undertaken a series of strategies to develop, nurture, and sustain a welcoming environment on campus, particularly for those in Direct Provision and members of the Irish Traveller community. These strategies encompass an on-going institution-wide response to the unprecedented global refugee crisis and low levels of participation in higher education among the Irish Traveller community, and to provide access to higher education opportunities at NUI Galway.

This webinar will take participants through the institutional strategies taken to achieve ‘University of Sanctuary’ status and introduce some of the individuals and organisations that have both benefitted and contributed.

Thu 14 April 2022, 16.00 – 18.00 CET: Diversity and discrimination at the university: from recognition to consideration (University of Bordeaux)

Thu 14 April 2022, 16.00 – 18.00 CET: Diversity and discrimination at the university: from recognition to consideration (University of Bordeaux)

Eric Macé (Professor of Sociology): framing elements : the aims are :

Yamina Meziani (Lecturer in Sociology), her thesis was on a comparison of diversity policies in France and the Netherlands:

Marion Paoletti (Professor of Sociology, in charge of equality and diversity at the University of Bordeaux):