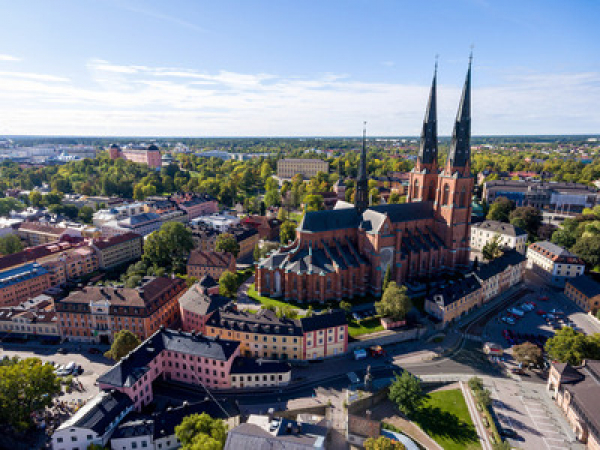 The total emissions of greenhouse gases shall:

All goals are relative to the year 1990 and are measured in absolute numbers. The climate goal is in line with the findings of the UN Panel on Climate Change in its fifth Assessment Report in 2013–14, but with its time horizon brought forward.

The more rigorous goal horizon has two purposes: first to show the need of climate policies with greater safety margins, and secondly to take responsibility for historical emissions. It also assumes responsibility for emissions from the production, in the rest of Sweden and other countries, of goods and food that are consumed or used in Uppsala but are not included in Uppsala’s emission estimates. The biggest items are judged to be construction and installation materials and food.

In Uppsala’s Climate Roadmap (2015) future scenarios were set out and an assessment of the possibilities of achieving the climate goals. It is estimated that the goal for the year 2020 can be reached in cooperation with other local players, above all in the Uppsala Climate Protocol, and with a somewhat strengthened national climate policy. It assumes that the Interim Targets in the programme are achieved, together with other goals in the municipality’s plans and programmes relevant to climate, for example the waste management plan. One basic precondition is that town planning in the comprehensive plan and its transport emission goals are achieved. Transport emission goals are manifested in several policies and plans within the transport sector which complement the Environmental and Climate Programme. A large part of goal achievement 2020 is the planned investment by Vattenfall in a new bio-fuel plant replacing the large peat-fired heating and power plant. A final precondition is a more moderate growth in overseas holiday flights by the people of Uppsala compared to today’s strong growth trend.

To achieve the long-term goals for 2030, 2040, 2050 and 2070 requires considerable reorientation in most areas of society. A climate roadmap is being produced within the framework of cooperation of Uppsala Climate Protocol.